Suffolk as a Cappella

This past Friday night I had the pleasure of attending an a cappella showcase featuring groups from institutions around the region. The event was produced (their first production ever!) by a relatively new a cappella group here at Suffolk, Soulfully Versed. There were many members of the Suffolk community in attendance, including parents, and all were having fun.

The entire show was really wonderful, but it was Soulfully Versed’s video and performance that I want to comment upon here. As someone who cannot carry a tune at all, I am always amazed by people who can sing so well, and do so accompanied by their own vocally created beats without the support of separate musical instruments.  But it was Soulfully Versed’s commentary that impacted me most.

These students are clearly not only passionate about singing, but also about what a cappella represents. They talked about a cappella music in a way that suggested a celebration of diversity – the blending of voices together so as to create a wonderful song that is richer than when each individual is singing alone. I suppose at a basic level all of a cappella is about that blending. But this group’s intentionality stood out in that it was clearly not only about the music, but also about much more.

The students in the Soulfully Versed video explain it better than I could.

“A cappella to me means many voices and many people from different places, different backgrounds, and different paths, who come together to finally make one and be one together,” said Htet Ei Wai, a Soulfully Versed singer.

Founding member and president Jo’lise Grant summed it up: “A cappella is family” – a sentiment echoed by others in the group.

And it dawned on me as I was sitting in the theater enjoying the performance of every group there, that a cappella, as represented by Soulfully Versed, is in fact a musical representation of what Suffolk aspires always to be: an inclusive community where people from a broad range of backgrounds, races, orientations, geography, identities, and beliefs come together in concert to create a community that so uniquely blends interactions, engagements, opportunities, and learning.

There is no doubt that we have outstanding curricular and co-curricular programs in the arts at Suffolk. And I may just start pitching us as an institutional embodiment of a cappella. Now if only I could carry a tune. 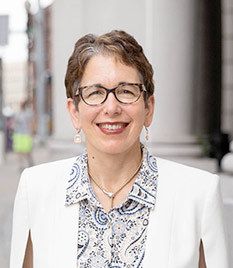